As a criminal defense law firm with offices in New York and Los Angeles, we represent clients accused of all types of crimes and charges. We’ve represented near every type of criminal case imaginable, but even we come across some things we’ve never seen before.  Without further ado, the 10 dumbest criminals we’ve seen this year:

9.  Texas resident Johnny Goodman Jr. walked into a local Chase Bank and claims to be Michelle Obama’s adopted son, then proceeds to try and access the Obama’s account, except that they don’t have an account with Chase and he is a middle-aged white man. Goodman was later found to have marijuana on him and already had two outstanding warrants. Read More

8.  David Samuel Crisp was on trial and facing an almost 10-year sentence for a horrific gang rape. While he was standing in dock, he decided to hand his co-defendant a bag of marijuana. A prison guard smelt the drug, and Crisp’s sentence was increased.  Read More

7. Stuart Delaney tried to raid bookmakers in Britain, and threw a brick at a security screen only to have it bounce off twice. He then tried to steal a charity box, but it was too small to fit and got stuck. He then gave CCTV cameras a perfect view of his face as he was running out. Delaney was sentenced to three years and eight months. Read More

6. Another CCTV snag, as two men attempting an armed robbery in Central London put on their disguises in an alleyway covered clearly by a CCTV system.  Read More

5. Aaron Burrell and Yvonne Thyberg stole a television from a house in New Mexico and thought they got away clean. What they didn’t know, was that they accidentally pocket-dialed 911 and proceeded to talk extensively of the crime they just pulled. Both are in custody and due in court next week.  Read More

4. Ruben Zarate donned a mask and revolver and tried robbing a Chicago muffler shop, but was dismayed when he found out the safe couldn’t be opened because the manager wasn’t around.  He decided to leave his phone number with the employees, and told them to call him when the manager arrives. Employees called the police instead, who shot Zarate in the leg and arrested him. Read More

3.  The Selfie Slip-up: A 19-year-old man burglarized the Wazee Sports Center in Wisconsin and ran off, but not before taking a photo of himself and leaving his phone at the scene. He was arrested four days later. Read More

2.  Alvin Cross needs to organize his contact book better. The Albany, GA. native was on parole when he texted his probation office “You have any weed?” The officer then showed up to Cross’s house and found a bag of cocaine. Cross is serving extra time in addition to his parole violation.  Read More

1.  Samuel Evan Lake is combining social media with a new kind of stupidity.  Christchurch police posted a Facebook status update asking if anyone knew where Lake was. Lake finds the update and responds to it directly saying “I need to get a new mugshot.” The police reply with “Come see us and will arrange at no cost…” The picture and comments went viral, and Lake was arrested within 24 hours.

And there you have it…our #1 dumbest criminal! 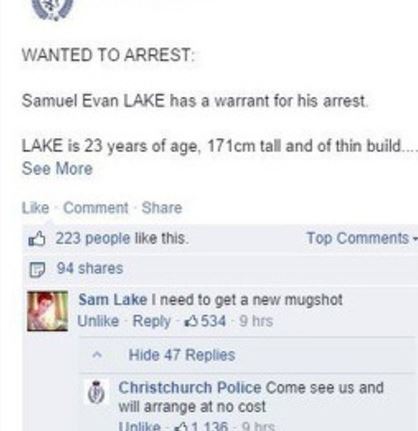